Thanks to some accidental overplanting and really good weather, I’m overflowing with tomatoes this year! Since they are trickling into my kitchen in small batches and my paste tomatoes didn’t survive, I don’t always have the right mix to make sauce or go through the trouble of canning them.

Enter the “sun-dried” tomato via the dehydrator. They are delicious, easy, and definitely not as messy as I thought they’d be.

There are more detailed instructions below, but basically it’s slice, season, dehydrate. Easy…very, very easy. The best part is that they taste even better than store-bought sun-dried tomatoes! 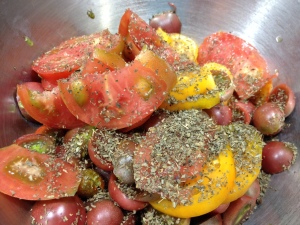 This batch was a mix of cherry and full-size tomatoes.

Season the tomatoes with any dry herb you like. I prefer basil, but oregano, garlic, or parsley might also be yummy. Stir the tomatoes to ensure relatively even distribution of the seasoning.

Spread the tomatoes onto your dehydrator’s trays in a single layer. If foods have a habit of sticking to your trays, you can lightly spray the trays with oil before laying the tomatoes down.

Dry at 145-155 until they are still flexible but leathery and no longer seem juicy. The length of time depends on the thickness of your slices. My large tomatoes typically dry in 6-8 hours, but my cherry tomatoes tend to take 10-14.

When they are dry, remove from the trays, let cool, and store in airtight bags or containers. I store them in the fridge or freezer because I don’t like to chance a batch going bad from some excess moisture.

Use them in salads, sauces, pasta salads, on sandwiches…wherever you like a bit of extra punch. Or, throw a baggie in your lunchbox for a yummy snack.